ERMA WRITES ABOUT ‘EVERYDAY HUMDRUMS’ AS EMPLOYEE AT RIKE’S.

Long before Erma Bombeck waxed eloquent about the perils of raising children and training husbands, she wrote tongue-in-cheek columns about taking the bus to work, filling in for the boss while he’s on vacation and experiencing problems with escalators.

In 1946, at 19, Erma Fiste took a part-time clerical job in the personnel office of Rike’s 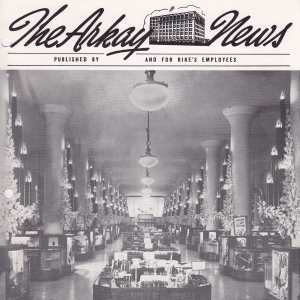 department store in Dayton, Ohio. One of her tasks was writing for the Arkay News, the store’s monthly employee magazine, in which Erma illuminated “the human side of just everyday humdrums that make you laugh at yourself in spite of any old situation.” Fifteen of her columns from the Arkay News are part of the collection.

In one Arkey News column, Erma described the many benefits of working at Rike’s Department Store: “…Rike’s hospital would give me my Carter’s Little Liver Pill free of charge if I needed it — I could consume 2,624 calories for only 26 cents in the store cafeteria, and if I adhered to my criminal tendencies, I could even clip recipes from the magazines in the ladies’ lounge.”

In another column, about her experience as a sales clerk, Erma wrote, “I wasn’t behind the counter five minutes when I spotted a prospective customer headed toward the door. Using the old running tackle that brought victory to Notre Dame in 1935 I apprehended him. ‘I don’t believe you’ve seen our notions counter,’ I said jumping up and down on his chest.”

All 15 columns, which were originally published between August 1946 and November 1947, can be read in their entirety. Original copies of the magazines are located in the Rike’s Historical Collection in the Special Collections and Archives at Wright State University.

Arkay News, August 1946 – In her debut column, Erma describes her experiences trying to catch an elevator down from the seventh floor. The issue also introduces Erma to other Rike’s employees in a section called, “Have You Met Her?”

Arkay News, October 1946 – In “Seeing Yourself” Erma discusses the joys of public transportation during her commute home from work.

Arkay News, December 1946 – In “Christmas Eve at Rike’s,” a parody of “The Night Before Christmas,” Erma describes the proper gifts for different Rike’s employees.

Arkey News, February 1947 – In “Dream or Nightmare,” Erma give an account of how Rike’s employees shouldn’t behave.

Arkay News, March 1947 – In this issue, Erma’s column is given a name for the first time, “Fancy With Erma Fiste.” In this piece, Erma laments her inability to wear the new fashions.

Arkay News, April 1947 – Erma describes her attempts to coordinate a going-away party for another Rike’s employee.

Arkay News, May 1947 – Erma suggests the origin of “days off” and discusses why she can’t get any rest on hers.

Arkay News, July 1947 – Erma takes over for her boss while he’s on vacation — with mixed results.

Arkay News, September 1947 – Erma secures a sales position, but is it her calling?

Arkay News, October 1947 – Erma shares what it takes to be a “floor reporter” for the Arkay News.

Arkay News, November 1947 – Erma writes about the Rike’s escalator, sharing its Greek roots as “escalle” and “latum” meaning “miss a step and there’ll be one less voter at the polls this election.”

All scans of Arkay News are used courtesy of Special Collections and Archives, Wright State University.

Back to Bombeck Collection