ERMA SAW THAT KIDS WITH CANCER NEED TO LAUGH. 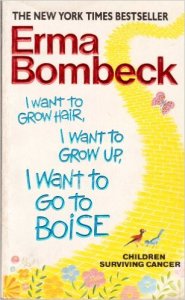 Erma had branched out from writing by producing a television series, stumping for the ERA and even recording a comedy album (“The Family That Plays Together… Gets on Each Other’s Nerves”). But never had she leaned further out on a limb than when she wrote I Want to Grow Hair, I Want to Grow Up, I Want to Go to Boise. The book addressed a topic that was anything but funny — children with cancer. Erma seemed an unlikely candidate to write a book on such a serious topic. People wondered how she would handle the subject.

At first, Erma couldn’t imagine writing anything humorous about cancer. Then Ann Wheat, assistant director of Arizona Childhood Cancer Services and director of Camp Sunrise (a camp for children with cancer) in northern Arizona, convinced Erma to visit Camp Sunrise, meet the children and then decide.

Erma heard laughter. She talked to some campers and discovered they were normal kids entirely free of self-pity. While battling the disease with fierce determination, they accepted the situation with a maturity that most adults found astonishing. They viewed cancer as an unwelcome visitor in their lives. It wasn’t who they were. What cut deeper than the physical pain was the way healthy people treated them — as though, once touched by cancer, they were transformed, too fragile for fun.

For almost three years, Erma walked and talked and lived the life of families with cancer. She learned that with or without a serious illness, kids love to have fun. They want to be treated the same as everyone else, and they thrive on pranks, silliness and practical jokes. A healthy child might thread rolls of toilet paper through the trees on her best friend’s property. A child with cancer will twist the foot on his artificial leg so it faces the guy sitting behind him on the ski lift.

Time and again Erma saw that kids with cancer need to laugh. “If it hadn’t been for my sense of humor,” she heard over and over, “I wouldn’t have survived this.” She had to live their pain before she could understand their laughter.

It turned out that I Want to Grow Hair, I Want to Grow Up, I Want to Go to Boise (the title was suggested by a boy’s three wishes) was not so different from books Erma had written before. Parts of it tickled the funny bone and parts made readers cry.

While not a mega hit, the book made a great deal of money. Erma assigned all American profits from the book to the American Cancer Society. Profits from foreign editions went to Eleanor Roosevelt International Cancer Research Fellowships, which brought foreign cancer specialists to America to study cancer patients and treatments.

From the book, Erma Bombeck: Writer and Humorist by Lynn Hutner Colwell.
Used with permission of the author.

Back to Erma’s Life