DRAWING ON FAMILY LIFE, ERMA MOVES FROM THE PAGE TO THE SCREEN.

With the success of Erma’s spots on “Good Morning America,” all kinds of offers poured in. One was to adapt The Grass Is Always Greener Over the Septic Tank for a television movie, which, if successful, might lead to a permanent sitcom slot. On October 25, 1978, the TV movie starring Carol Burnett and Charles Grodin aired on CBS. Critics hated it.

A year later, ABC, not in the least deterred by Grass‘s dismal showing, gave Erma a licensing fee to develop a situation comedy. She thought up a concept and pitched it to Marcy Carsey and Tom Werner (who produced a number of television hits including “The Cosby Show”). They liked it. Erma had never written a script and knew nothing about creating a television series, but she agreed to do some of the writing.

Erma drew the television family from her own life. The show looked at an ordinary, though slightly manic family from — guess where? — Dayton, Ohio. Erma fought to make the mother of the family, Maggie, believable. She didn’t want Maggie outfitted in the latest fashion, sporting a hairstyle that only the Queen of England could afford. Maggie and her family (including a son who was never seen since he’d entered the bathroom when he hit puberty), as Erma envisioned them, were down-to-earth, no-frills types who struggled with everyday problems and often lost.

Everyone who needed to loved the pilot for “Maggie,” and the team received the go-ahead to produce a number of episodes. Erma was promoted to executive producer, something she knew even less about than writing television scripts.

Erma rented an apartment in Los Angeles. Awakening at 5 a.m., she’d dash off a column before climbing into a rented Toyota, race to Studio City by 9 a.m., work on scripts, oversee run-throughs, dress rehearsals, and editing until 9 p.m., fall into bed, wake up, and do it all again. On Friday nights, she would turn in the car at the Burbank airport and fly home to Bill and the kids, then boomerang back to L.A. again. She followed this routine for four months. 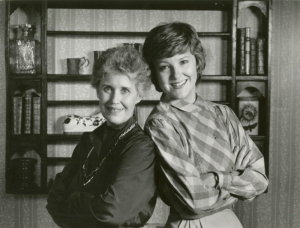 The network ordered 13 episodes. She hired writers but wrote five of the first eight scripts herself. The show, starring Miriam Flynn in the title role, hung on for eight weeks before it was canceled. Much to Erma’s amazement, although the show died, the studio directors had no complaints. They asked her to develop another series. Erma turned them down flat. There was no way she could have kept up the crazy schedule any longer.

For Erma, the experience was far from a total loss. She’d made new friends and enjoyed working with the people who had developed the project and brought it to life. Like most of the other bumps in the road of Erma’s life, the demise of “Maggie” proved a sad but not personally devastating experience. When it was over, she turned in her rental car and headed happily back to the desert for good.

From the book, Erma Bombeck: Writer and Humorist by Lynn Hutner Colwell.
Used with permission of the author.

Back to Erma’s Life